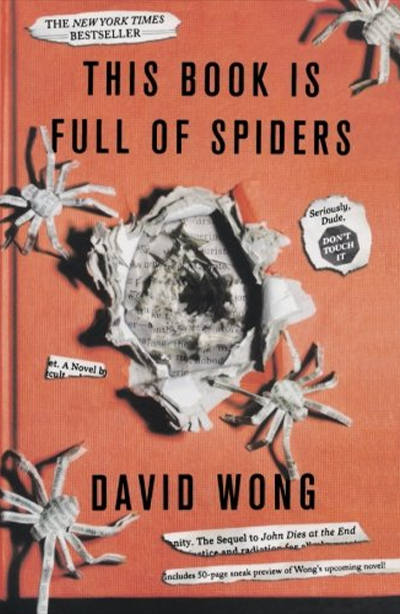 Warning: You may have a huge, invisible spider living in your skull. THIS IS NOT A METAPHOR.

Y ou will dismiss this as ridiculous fear-mongering. Dismissing things as ridiculous fear-mongering is, in fact, the first symptom of parasitic spider infection -- the creature stimulates skepticism, in order to prevent you from seeking a cure. That's just as well, since the "cure" involves learning what a chainsaw tastes like. You can't feel the spider, because it controls your nerve endings. You won't even feel it when it breeds. And it will breed.

Just stay calm, and remember that telling you about the spider situation is not the same as having caused it. I'm just the messenger. Even if I did sort of cause it. Either way, I won't hold it against you if you're upset. I know that's just the spider talking.

"Like an episode of AMC's "The Walking Dead" written by Douglas Adams of "The Hitchhiker's Guide to the Galaxy." …Imagine a mentally ill narrator describing the zombie apocalypse while drunk, and the end result is unlike any other book of the genre. Seriously, dude, touch it and read it." –Washington Post

"Kevin Smith's Clerks meets H.P. Lovecraft in this exceptional thriller… David Wong (Jason Pargin) is a fantastic author with a supernatural talent for humor. If you want a poignant, laugh-out-loud funny, disturbing, ridiculous, self-aware, socially relevant horror novel than This Book is Full of Spiders: Seriously Dude, Don't Touch It is the one and only book for you." –SF Signal